Once upon a time, about 2 weeks ago, a family moved from Philadelphia to the coastal town of Portland.  Since the father’s new work would only pay for a U-Haul (*NOT MOVERS*), the family schlepped all their belongings the best they could in the back of a 26 Ft truck. 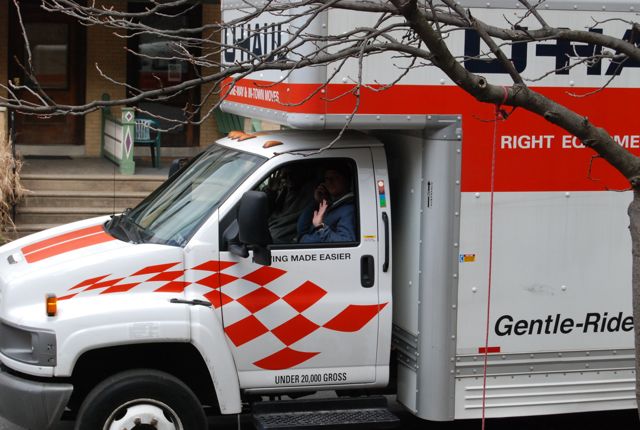 The youngest daughter’s beloved goldfish were of course making the trip too, 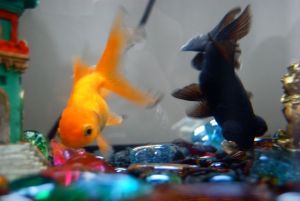 safely snuggled inside the *protective glass cocoon* of their aquarium.

The family’s trip began swimmingly, fueled by gasoline and a dozen Dunkin Donuts. But round about Marlborough Massachusetts, the mother – driving behind the U-Haul in the family car – began to notice water dripping from the back of the truck.  Frantically, she tried calling the father.  But the deafening road noise of the uncomfortable U-Haul thwarted her attempts for MILES.  By the time the father realized what had happened, the family was nearly to Maine.  And soon they were there, opening the back of the truck and confirming their worst fears.  The aquarium had indeed shattered and was completely devoid of water.  The little girl was devastated.

Until Goldfish #1 was found… ALIVE!!!!!!! After two hours without water, being jostled at the bottom of a glass-laden fish tank, Lil’ Blackie was still clinging to life!  The father whisked him TOUT DE SUITE upstairs to the (relative) safety of the only bowl available in the apartment BESIDES THE TOILET.  The dog’s food dish.  Although shaken just this side of the pearly gates and visibly worse for the wear, miracle fish BLACKIE was still gulping for breath and rallying as each moment passed.

Do not lose heart, friends.  Despite the fact that Disney did NOT write this one, there still remains a happy ending.  Although the initial search for Sunny proved fruitless, and the family believed they would stumble upon her lifeless body beneath one of the soggy boxes, that’s NOT WHAT HAPPENED>.  No.  B/c as the mother attempted to lift the shattered remains of the aquarium out of the truck, Sunny POPPED out of the inner workings of a DECORATIVE PAGODA!! 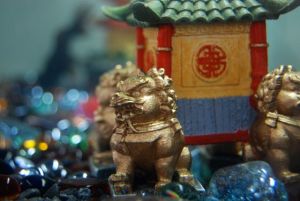 Everyone GASPED! And the father squealed like a girl as he giddily ran the fish upstairs.  Although Sunny appeared to have survived a blender cycle on Frappe, she was otherwise just fine. After being transferred to the red thermos cooler overnight, by the next afternoon, both fish were pronounced Stunned, but Swimming.  And by the following day, they’d been upgraded to STABLE and safely relocated to their new home.

Not so unlike the rest of the family.