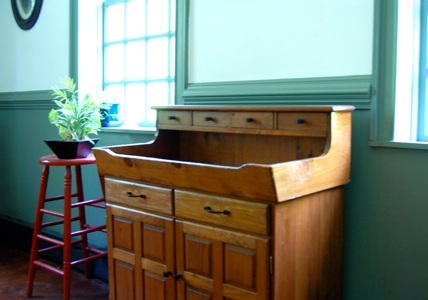 Late last Sunday we decided to go to the thrift shop and look around.  Within 5 minutes I’d spied a sweet looking cabinet. My husband & I liked it – but no price tag.  I summoned the guy from the back, who came out & marked it $7.99.

END_OF_DOCUMENT_TOKEN_TO_BE_REPLACED

Our good neighbors across the street are preparing to move and have been gifting us all sorts of lovely furniture as they sort through their stuff. When we were over there a few weeks ago (picking up a mirrored vanity for the girls, thank you very much!) we spotted this absolutely stunning cabinet… which we ooohhhed and aahhhed over until they oh-so-graciously decided to sell it to us. HOORAY!

This weekend was dedicated to the purchase & relocation of said cabinet, which – now installed – looks like it was custom-made for a corner of our family room. As we say in Philly: BEE-U-tifullll!

We don’t know much about it, apart from the fact that the previous homeowner bought it during his stay and it’s been there ever since. We were told it came from an apothecary. It looks pretty old (I’d guess later Victorian), has beautiful leaded glass doors and is solid (read DAMN HEAVY). We spent the better part of Friday disassembling the enormous thing, moving all the pieces over to our house, and then reassembling it anew. Fortunately (or unfortunately – depending upon your perspective), most of the actual moving fell to the guys. I pride myself on being strong, but I tried lifting the base several times and managed only to cut a finger and wrench my neck so badly I spent half of last night awake in pain.. LOVELY!

Fortunately I was more helpful when it came to putting it back together, and I did manage NOT to break the glass doors. Have to get some oil soap and give it a good once-over – but it’s already so purdy, I don’t think we’ll be able to stand it. We’ve spent a good bit of time this weekend simply gazing at it from the couch. Ahhhhhhh…