Unless you’re a wonderfish w/ a will to live stronger than superglue.  That’s RIGHT folks.  Blackie the brave is ALIVE & well!!

Just weeks ago, he was host to a legion of creepy crawlies so repulsive they’d likely do in lesser men.  He underwent treatment, consisting of primitive home surgery and three – maybe four rounds of soak in potassium permanganate (aka PURPLE DIP).  He has spent almost a month living in a tiny glass bowl, without companion or decorative pagoda.  But, today –

Looking back over the past weeks I am astounded.  MOST PEOPLE WOULD HAVE FLUSHED HIM AFTER ALL.  But despite everything, Blackie has not just survived.  He has thrived.

The parasites?  Gone.  His gaping wounds, incapable of scabbing?  Healed.  If I hadn’t seen it w/ my own eyes, I’d hardly believe it. 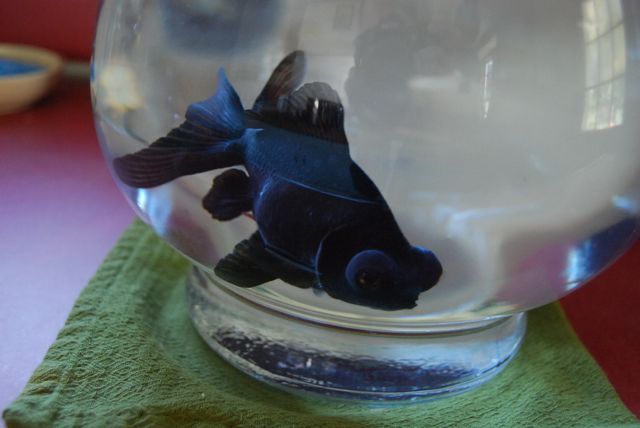 In the immortal words of Winston Churchill:

When I last left you, my wonderfish Blackie was suffering from parasitic anchor worms.  For those of you unfamiliar w/ anchor worms, let me just say YOU ARE LUCKY.  Now onto their Treatment.

Step One: REMOVAL OF THE PARASITES.

Unfortunately, the literature is divided as to whether or not one should attempt to remove anchor worms from an infected fish.  Half saying it will kill the fish, half that it will save them.  We opted on the side of GETTING THE DAMN THINGS OUT.

Using tweezers, my husband gently removed each of the protruding anchor worms.  It didn’t look hard – each seemed to slip right out w/ the slightest pull. 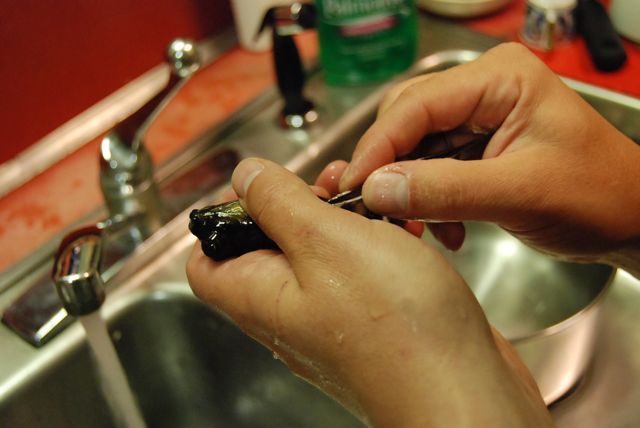 BUT BOY WAS IT GROSSSSSS>!  Those anchor worms are VILE.  Truly the stuff of nightmares.  And as I don’t want to scar you for eternity, I’ll just share a MERE SHADOW of one.

BOY I am SOOOO GLAD I didn’t have to touch them.  For enduring this whole horrific ordeal, both my husband & Blackie should be awarded gold medallions.

After much research, my husband determined potassium permanganate was our best course of treatment.  Potassium Permanganate is a chemical which kills parasites and helps heal sores.  WIN-WIN.  So, on Friday, John obtained some from a biologist friend at work.  He then prepared a very dilute solution of potassium permanganate in regular tap water.  As we didn’t have exact measurements for this application, he used mere granules of the substance.  It came out a vivid purple.  In this case, I am hoping PURPLE = gooood.  It was quite an emotional several minutes for us all, as Blackie soaked in the solution and looked at us w/ his big googly eyes.  I know I wasn’t the only one thinking DEAR GOD PLEASE LET THIS NOT KILL ME. 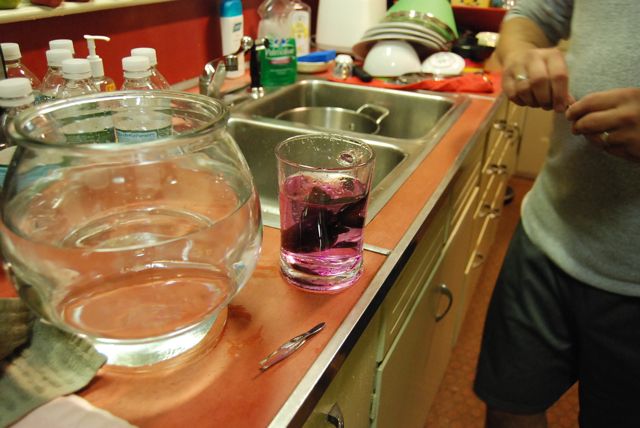 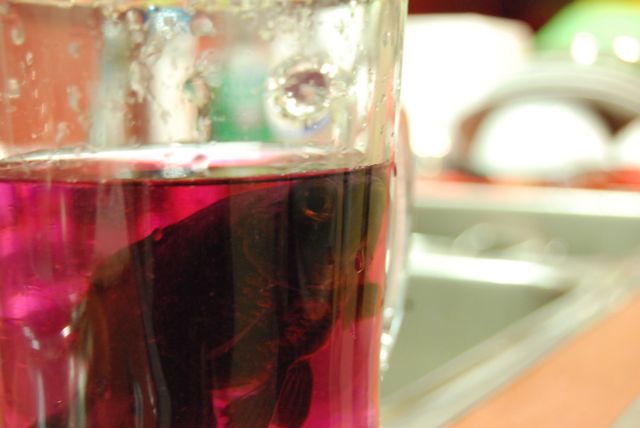 After the chemical soak, Blackie was released into a spring water recovery bowl.

It’s a bit hard to see from the photo (YOU ARE WELCOME) but he has a multitude of lesions all over his tail and sides.  These mostly look like huge gaping open sores.  Since they are underwater, they never get the chance to scab over and look less scary.  So the whole thing is indeed hideous.  Our daughters keep commenting that Blackie’s skin is “falling off” but it’s just open flesh, really.  Several areas still look highly suspect, like a parasite may be on the verge of emerging.  Yesterday, John removed Blackie to tweezer out a late-emerging anchor worm.  And today there are a couple spots that look bad – like worms are peeking out – but nothing yet.  We will just keep watch.  Tonight we are planning a second round of the Dip.

The fact that Blackie has survived thus far is TRULY a testament to his strength and will.  Keep sending those well wishes.  I will keep you posted.