As someone who’s spent the better part of a decade trying to reconcile herself to a chronic disease, I know all too well you can be miserable, or you can accept, adapt, and move on.  Shit happens. Whether good or bad, it’s life. And life is what you make it.

Four years ago I told the world: I want to be a roller girl. I declared my intent, as well as my fear, and I owned it. Although some initially scoffed, most readers said GO FOR IT!  Last fall, I finally strapped 8 wheels to my feet and rolled out of my comfort zone.

I met Olive Spankins at Maine Roller Derby‘s 2012 Wicked vs. Good bout. Think Wonder Woman on roller skates, tattoos instead of a lasso. Although Olive retired from MRD in 2010, she’d been playing in the bout and my younger daughter was positively enchanted. We went to meet her afterward and I casually mentioned my derby dreams.  Olive immediately told me about Derby Lite. 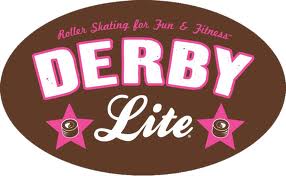 Derby Lite is Roller Skating for Fun & Fitness. Our certified instructors lead high energy classes for beginner, intermediate and advanced skaters where ladies become healthier humans – physically and mentally – as they learn to skate a la roller derby without the impact or competition. Each 90-minute to two hour workout includes off-skates dynamic warm-ups, on-skates skills and drills, upper body strength exercises and cool-down stretching. It’s a balanced, whole body workout that’s never boring, shows progress week after week, and brings you into a welcoming community of women like no other. Are you ready?

Derby Lite was created by a former derby skater, Queen B of the Windy City Rollers. Why? Well, my friends, because (as mentioned above) shit happens. Instead of giving up skating when her life got too busy for competitive derby, Queen B used her entrepreneurial skills to CHANGE HER LIFE, and in the process the lives of countless other women. Even if she didn’t know precisely what she was getting into, at least initially, she had the drive and forethought to GO FOR IT! What started as a recreational activity for Queen B and a group of friends in a school gym in Illinois has grown into a nationwide exercise phenomenon for hundreds of women of all ages, shapes, and sizes. Queen B created something magical simply because she refused to quit.

Women love to roller skate. Okay, not all, but most of us.  And at the derby level, women LOVE TO ROLLER SKATE (all caps).  Even when every fiber of their physical being is begging for mercy, roller girls push themselves harder, and further, often to the literal breaking point.  But even when they can no longer skate competitively, they do not want to stop skating.  Roller derby is in essence a sort of super glue that often holds together the lives of its participants.  It requires almost-steadfast devotion, constant discipline, and practice.  In return it gives friendship, strength, endurance, POWER.  Giving that up can be not only difficult, but painful.

Enter Derby Lite.  Retired derby skaters now have a CHOICE.  I’m not saying the draw to becoming a skating instructor is as powerful as competitive skating, but to be paid to do what you love?!  WOW.  I can only imagine the excitement and elation.  But for the rest of us?  Well, as a woman, daughter, sister, wife, and mother of two daughters, I’m always thinking woman’s thoughts.  I’m doing my best to raise my daughters to to be independent, strong and brave in a world that too often tries to knock us down.  Last week I posted about my daughter’s experiences with bullying.  Being a woman can be hard.  But women are inherently strong!  Without beating the reproductive drum, WE CAN MAKE BABIES.  We support the continued health and existence of the human race.  Without good mothers, we’d all be a bunch of animals.  Yet women worldwide fight for fair treatment.  And modern life necessitates that too many of us are tasked beyond comfortable capacity.  We must maintain gainful employment, along with domestic duties, parenting, partnering, and more.  Often we’re so busy doing for others that we forget about ourselves.  And collectively we take a dive.

Enter Derby Lite.  Derby Lite is a success because it CELEBRATES ITS PARTICIPANTS and embraces us where we are.  Much like “regular” derby, Derby Lite is for, by, and about women.  This is not about one-upping the lady next to you at the gym.  It’s not about turning male heads, or conversely, hiding from them.  Derby Lite is about embracing who you are at this moment in time, and taking strides (pun intended) to make you into a happier, healthier individual.  Without judgement and fear.  For someone who detests working out, Derby Lite is a dream!  Roller skating is FUN, but it’s also hard core fitness.  I get to spend two hours of ME TIME each class with women I enjoy.  All of us, different, but equal.  We sweat together and have a BLAST!  Laughing, joking, being ourselves, working hard, doing something we all love.

Before I joined Derby Lite I NEVER (trust me on this) NEVER wore spandex.   The thought of squeezing myself into a sausage skin was enough to make me break into a cold sweat.  Roller skating has completely changed my perception. Whereas spandex used to be something to be feared (as in HEY WORLD CHECK OUT MY PAUNCH AND/OR ASS FLAB!), it now makes me feel not just snug-as-a-bug-in-a-rug, but TOUGH. Empowered. My running pants say I AM AN ATHLETE. My biker shorts say THIS ASS IS GONNA KICK YOURS. I never used to wear spandex, not because I was lazy, but because “working out” wasn’t something I did. I worked hard on a daily basis doing chores that had to be accomplished, and I still do. But skating is different. It’s not a chore but a choice, and spandex is now a uniform of LOVE.  As much as I give it up to spandex, however, there’s something far greater getting me into my skates week after week – and that’s friendship.  As much as I LOVE TO SKATE, I wouldn’t have made it nine weeks, let alone nine months, without the amazing women skating beside me.  I mean it when I say friendship makes all the difference.  My Derby Lite sisters are spandex for the soul!

You might be wondering… is this the end of my story?  To be honest, I don’t know.  After all, shit happens.  Nine months ago, I was a woman who’d long dreamed of becoming a roller girl, but because of Meniere’s Disease thought I had no chance.  Nine months later, I’m skating my heart out and loving every minute.  Maine Roller Derby is holding team tryouts in mid-September, and for the first time in my life, I’m seriously wondering whether competitive derby is a viable option.  Part of me wants to TRY IT SO BADLY I CAN TASTE IT.  The rest of me just wants to snuggle closer with my Derby Lite sisters and laugh.  Whether I tryout for Maine Roller Derby or stick with my beloved Derby Lite, Queen B has taught me that magical things happen when you refuse to quit.  Amen, sister.  And thank you.  XO

18 thoughts on “Shit Happens, or Why I Love Derby Lite”