Where do babies come from…??

My older daughter first asked that question when she was two and I was pregnant with her brother.  The pregnancy was difficult from the start, and ended badly.  My daughter, although young, was precocious.  She wanted to know what was happening.  Momma, why are you so sad?  Where’s the baby? and so on.  Instead of pretending things away, I was honest.  I explained gently that her brother had died.  That I wouldn’t be sad forever and that it would be okay.  I tried my best to communicate that birth is something very precious, and that it doesn’t always work out.  Not a lot of detail I know, but at the time it was enough.

Six months later, I was pregnant again.  SURPRISE!  Everyone around me was walking on eggshells, but I knew it would be fine.  How?  I don’t know; I just knew.  My daughter of course wanted something more concrete; she wanted INFORMATION.  So my husband and I did what came naturally.  We told her.  Not graphically.  But in a straight-forward, age-appropriate manner.  We checked out books from the library and read them together.  She understood the idea of intercourse from nature documentaries and trips to the zoo.  She’d seen animals mating.  And so baby-making made sense, at least in an abstract way.

Fast forward several years, after our second daughter was born.  The girls were getting older.  And as kids age, there’s inevitably more talk – if not about sex, then at least about body parts.  From the get-go, my husband and I have always called a spade a spade.  Or in this case, a penis a penis.  As soon as our daughters began noticing the differences between our bodies, we laid it all out.  Genitalia are just that – genitalia.  Men have a penis and testicles.  Our female bottoms are a bit more complicated, with vagina, vulva, and more.  But we all have an anus.  And we all have breasts.  Whether they provide milk or not, we all have nipples.  These parts of the human body may be private, but they’re nothing to be embarrassed about.

And so we schooled our daughters.  Not to be afraid of their bodies.  Not to be shy in talking about them, especially if there’s ever an issue.  We told them that it’s important to respect their bodies, to be respectful of other people’s bodies and privacy, and to always refer to body parts – all of them – by their correct, anatomical terms.  We reminded them to come to us if they were ever curious, or had questions.  That we would always be happy to explain anything they might be wondering about.  For years, this has been the status quo.  Openness 101.

My younger daughter came home from school several months ago.  From the minute she stepped in the door she was acting squeamish, in an embarrassed yet wanting-to-spill-the-beans kind of way.  What’s UP?  I asked her quizzically.  She looked at me with a sort of sly side grin, and said WE STARTED FAMILY LIVING AGAIN.  Oh.  Okay… (smiling).  You see, Portland public school students receive a number of years of reproductive/body talk, beginning in elementary school.  My older daughter went through the curriculum in 4th and 5th grades, and again in middle school.  And my younger daughter was apparently starting year number two.

So, I ask, what did you learn today??  She groans, rolls her eyes, and says “UUUUUUUGGHHHH.”  My curiosity piqued, “Do go on.” After several more prompts she finally pronounces the class “WEIRD,” and clams up.  The next two weeks proceed in much the same manner, my daughter returning home daily in a similar state, but offering greater glimpses into the subject matter.  UGH, TODAY WE LEARNED ABOUT BODY PARTS!!  While passing me her hand-out on the organs.  Fascinating!  By the end of the session, I’d managed to weasel out of her all that they’d covered and again reminded her that she could always talk to us about anything and everything.  Her older sister commiserating the entire time, as well as egging her on.  OH JUST WAIT TILL YOU GET TO 6TH GRADE. AND THEN 8TH! YEEEECH.

I don’t know how they “did it” back when you were younger (pun intended), but when I was growing up, all fifth grade boys and girls were given THE TALK.  I still have a coveted memento of the occasion. 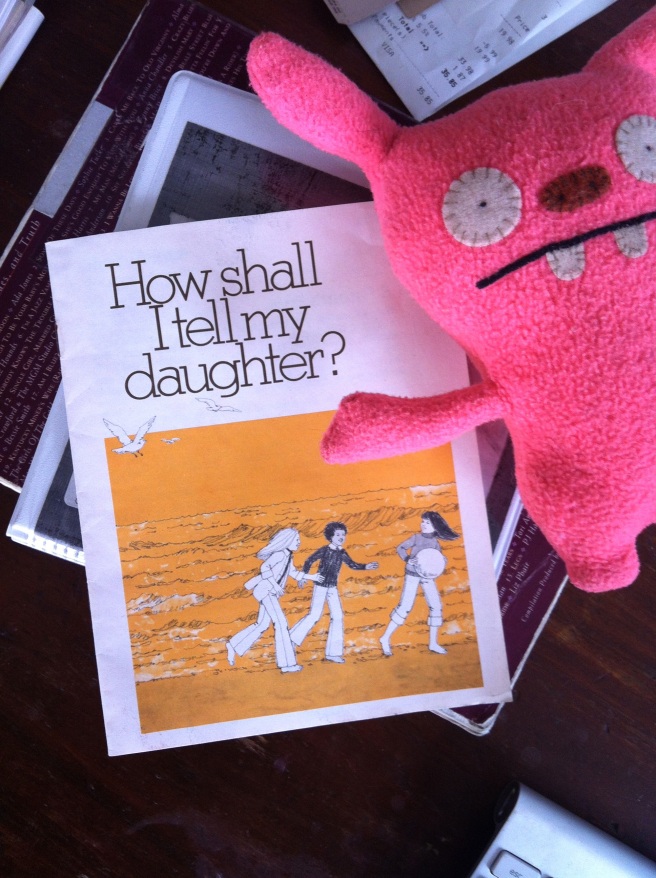 The booklet above was actually intended for my parents to use as a guide when talking to me.  But I can’t recall more than a scant recollection of any talk, per se.  I do remember sitting on my mom’s lap in the kitchen one time, and her mentioning periods.  And another time, I recall she leaned over, sniffed, and told me I was going to have to start wearing underarm deodorant.  But that’s it.  Thumbing through this thin booklet now, it seems almost quaint.  “How wonderful is that daughter of yours!  One day she’s a child at play and the next she’s a serious young lady thinking of her future.  During this tender season of her life…”  Tender season?  Wow.  I seriously need to use that.  Even the title itself “How Shall I Tell My Daughter?” is so proper as to suggest afternoon tea.  Suddenly I want to go put on a dress, get out a box of maxipads, and CELEBRATE MY WOMANHOOD!

Ever since “family living” ended, my younger daughter has made a comic pretense of discomfort anytime reproductive subjects or (especially) body parts are mentioned.  Accidentally slip a penis or vagina into a conversation (it happens) and she’s all EWEWEWEEWEWWWWWWW!!  STOOPPPPPPP ITTTTTTTTT!! while scrunching her face in disgust and running around in circles.  Of course, simply because of this over-the-top performance, I’ve taken to slipping “penis” in far more frequently just to get a rise (puns intended).  I’m not a bad momma, but it’s funny.  And frankly, as a parent you don’t get that many opportunities to besiege your child in a completely acceptable fashion.  It’s a lesson, after all.  The power of words cannot be underestimated!

Well.  In true karmic fashion, my younger daughter has finally figured out a way to beat me.  HOW?  Through the power of her words!  The last time I threw a penis and vagina into the conversation, she came back with MOMMY!  NO!  THEY ARE DINKIES!  AND VOOVOOS!!!!  My daughter, who has been taught from birth to name names, has bested me by referring to private parts in complete Suess-worthian nonsense. I could be angry, but I’m just amused.   So I have relented.  No more penises and vaginas at the dinner table.  No more dinkies or voovoos, either.