Yesterday, amid snow filled skies, a group of friends gathered to celebrate the union of two very much in love stuffed animals.

A marvelous time was had by all and the ceremony got me thinking about love.  Isn’t it amazing how two different species of stuffed animals can come together to form a perfect union?  I know some folks are really adamant about who can & cannot commit to one another, but really, who are we to judge the love a chickie can feel for a bunny, and vice versa?  Or, say. the attraction a Buffalo can feel for a Donkey?  Because surely you haven’t forgotten about MY FRISKY COOKIES??!

YES FRIENDS! hard to believe they’re STILL humping after all these years!!  (But not as hard for us as for that donkey.)

December 2007.  Donkey & Buffalo find each other in a crowded tub of crackers.

As if their long lasting interlocked state wasn’t evidence enough, I have further proof that the Donkey & Buffalo’s inter-species love is here to stay.  Dear reader. What I have to show you may be shocking, but remember, it is NATURAL.  Earlier this afternoon, when I fetched my animal crackers from their special box, they…. weren’t alone. 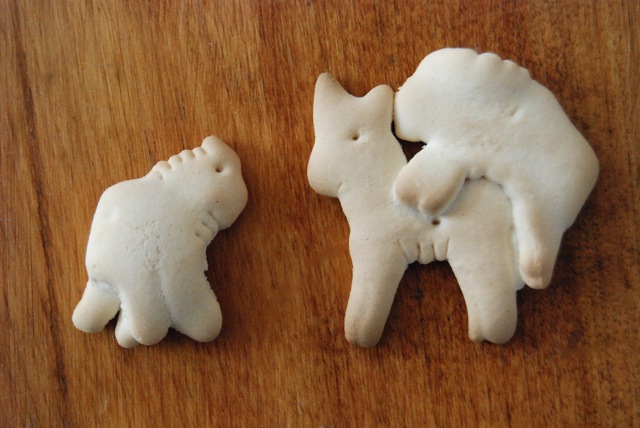 The Donkey & Buffalo’s union has produced a (I don’t know what to call it) just in time for the grandaddy of all Love Ins, Valentine’s Day.  Though he looks a little funny, his legs are a bit twisted and he appears to be moving forward and backward simultaneously, you cannot dispute the look of sheer unbridled JOY on the (whatever it is)’s face.  DON’T JUDGE!!!!  LOVE CONQUERS ALL

SO.  To all you naysayers. I say PPpFFFFFFTTTTTT.

And yet, THIS is what eBay deems acceptable.

Where is the justice?!

A couple days ago I had a passing fancy with regard to my oh-so-special animal cracker. I didn’t have anything better to do with my time – what with the electricians busily rewiring our house and the power going off willy-nilly. No cooking, no TV, no computer. nada. My mind was sort of drifting as I sat staring at the wall, and then suddenly I thought of my funny cracker. So I pulled it out to take a gander, and pretty soon I found myself going hog wild. No I WAS NOT EATING IT nor was I inspired to do anything unseemly. I was taking photos! All sorts of wacky photos of my cracker couple! And laughing at the hilarity of it all and enjoying myself heartily. So after that was all over, I thought hmmm.. perhaps I should try selling my cracker on eBay again? After all, we sure could use the money (not that I expected anyone to cough up $3600 for my cracker – but STILL….) So I thought, what the heck. I’ll try it again.

Soooo.. last night we’re watching Indiana Jones with the girls. John and I are drinking wine and we’re all enjoying our favorite snack of Berkley and Jensen animal crackers. We’re sitting there, sipping and munching, transfixed by Indy’s thrilling adventure, when I reach my hand into the bowl and – Huh. My cracker feels…weird. Bigger than usual. I pull my eyes away from the movie and look down to find:

Like two dogs at the park, the donkey and (I think) Buffalo are fused together into one great cracker of love.

Mommy, why are you laughing?? [I show them.] My husband loses it. Asks to see the cracker. We leave it on the table and threaten our children not to eat it. After the movie I position it on top of my dresser, tchotchke style. This morning I take its picture.

This cracker leaves me wondering. Was it a mix-up? a manufacturing glitch? Faulty equipment? Are those factory workers at the BJ’s (no-pun-intended) cracker plant just having too much fun? Should I let my kids eat animal crackers unsupervised or are they now considered adults-only snack food? And.. if I ate my special cracker, would it taste different? Questions. Questions…

I guess my biggest question is whether we should try selling it on eBay. I don’t really want to give up my copulating cracker. But who am I to keep it from the world? People bid on all sorts of crazy crap every day – remember that virgin mary grilled cheese? And although that was religious iconography (perhaps slightly loftier than my baked pornography), at least my cookie won’t rot.. And you just know someone’s gonna want to pay good money for animal crackers doing it! It would make a really unique Christmas gift.

Now I can’t stop thinking of titles for the post: